Check out these engaging texts to celebrate Hispanic Heritage Month with students!

Celebrating students’ heritage and opening doors to other cultures can provide some of the most meaningful lessons in the classroom. Hispanic Heritage Month (September 15 — October 15) provides students the opportunity to learn about the achievements and contributions of Hispanic Americans who have inspired others. This fall, celebrate Hispanic Heritage Month with these CommonLit texts by Hispanic and Latinx authors.

Cesar Chavez was an American civil rights leader who is known for organizing and advocating for farm workers. This text provides an overview of Chavez’s life, beliefs, and accomplishments. After reading, have students discuss why Chavez thought working together is the way to gain real power.

In this poem, the speaker describes the experiences of Sylvia Mendez, a Mexican-Puerto Rican civil rights activist. As a child, Mendez played an important role in desegregating California schools. As students read, have them take notes on Sylvia’s perception of the school she will attend.

Gary Soto is an award-winning poet, novelist, and memoirist, whose writing is informed by his Chicano Heritage. In this story, he writes about a young boy named Fausto, who wants to become a musician. Fausto comes up with a plan to earn enough money to buy a guitar, but he must decide if it is worth telling a lie in the process. As students read, have them take notes on the impact of Fausto’s actions.

Jesús Colón was a Puerto Rican writer of African descent who wrote often about his experience as an immigrant living in New York. In this thought-provoking essay, Colón describes an uncomfortable experience on a subway car during the 1950s. After students read, have them discuss Colón’s point of view in the passage.

“I am Offering this Poem” by Jimmy Santiago Baca (Grade 6)

Jimmy Santiago Baca is an award-winning American poet of Apache and Chicano descent. After a difficult childhood, Baca taught himself to read and write poetry. In this poem, the speaker offers his words to the reader as a token of his love. As students read, have them take notes on the meaning of the figurative language in the poem.

In this engaging short story by Sandra Cisneros, a key figure in Chicana literature, Rachel has just turned eleven but feels like she is much younger when she has an embarrassing interaction with her teacher. Students will relate to Rachel’s description of feeling “ten, and nine, and eight, and seven” at different times in the story. After students read, have them discuss the ways they have changed as they’ve grown older.

Julia Alvarez is a Dominican-American poet whose work focuses on her experiences as a Dominican in the United States. In this essay, Alvarez discusses the various names she has been given over the years. As students read, have them take notes on how the author reacts to the different pronunciations of her name.

Judith Ortiz Cofer was a Puerto Rican-American author of short stories, poetry, and young adult fiction. In this essay, Cofer shares her memories and her childhood desire to fly. As students read, have them take notes on how the characters in the passage view flying and how their perspectives relate to the larger theme.

Writer Julio Noboa, who grew up in the Bronx, wrote this poem when he was in eighth grade. In this poem, the speaker imagines a life of freedom under the “vast, eternal sky.” After students read, have them analyze how the author uses word choice and figurative language to develop the theme of the poem.

“Abuelito Who” by Sandra Cisneros (Grade 8)

This meaningful poem is by Sandra Cisneros, whose writing frequently draws on her experiences as the only daughter in a family of six brothers and her family’s constant migration between Mexico and the United States. In this poem, the speaker describes their aging grandfather. As your students read, have them take notes on how the author uses repetition to emphasize how aging affects their grandfather.

Gabriel García Márquez is considered one of the most influential writers of the 20th century. In this short story, an old man with wings disturbs a quiet town after crashing into a family’s yard. After students read, have them discuss what the old man symbolizes to different characters in the text.

To read more engaging literature to celebrate Hispanic Heritage Month with your students, you can explore our Latinx Authors and History text set! 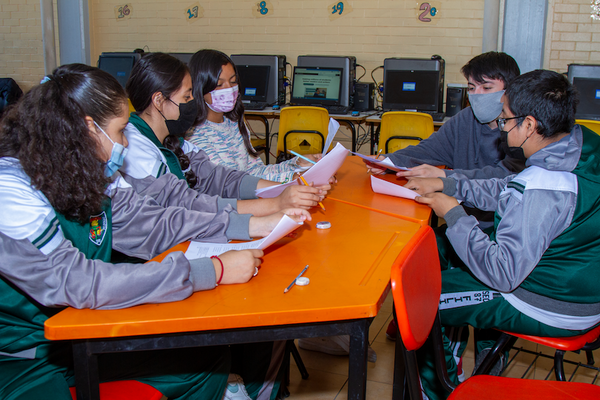 IntroductionThe beginning of the year is a key time to form trusting, meaningful relationships in your classroom community. These texts feature historical figures or characters with disabilities and learning differences, including texts about members of the Deaf or Hard of Hearing and Blind or Visually Impaired communities, people with autism,